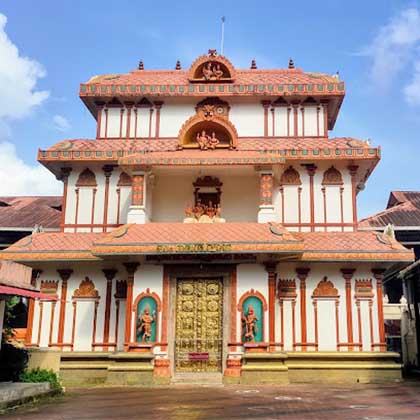 There is a certain relation between the history of Akavoor Mana and the temple formation. Akavoor Manaparambu (the land of Akavur Mana) lies in the Airanikulam village. Brahmins of the Mana were regarded as rules during that period. Years later, a conflict erupted in the family and a section of them moved to Vellarapilly village. But the Brahmins often visited Lord Mahadeva, then known as Airanikulathappan and Sree Parvathi. It is during this period that Akavoor Chathan came to the Mana as a dependent.

Seeing one of the Brahmins desiring to visit the Mahadeva Temple, Akvoor Chathan made a boat of granite and used it to transport the Brahmin to the temple. Years went by and the Brahmin grew old. One day, after his prayers at the temple, he cried to Mahadeva: "Oh my Lord! I have grown too old to come and see you. What shall I do now?" Soon he started his way back home. He lifted his Olakuda (an umbrella made of palm leaf), and found it heavier than it really was, and he told Akavoor Chathan about this experience. But Akavoor did not speak a word. Tavelling on the boat, Brahmin had the call of nature. Akavoor Chathan immediately moved the boat to a nearby land. Then he took his umbrella and to his surprise it seemed very light now. Still Akavoor Asked the Brahmin not to worry about it. After reaching the Manakkal land, the Brahmin got out of it and Akavoor Chathan overturned the boat and it rested in the mud. Even today one see a granite stone there lying upside down. It came to be known as Chathan Stone. The place mentioned above is where the Thiruvairanikkulam Temple is situated. Earlier it used to be a forest, Pulaya women (women of low caste) used to go there to cleanse the forest. Once, one of the women happened to use the granite stone to sharpen her sickle. All on a sudden, blood started flowing out of the stone and this Pulaya woman lost her mental balance and ran amok. It is said that she ran nearly three kilometers in a frenzy. All the land through which she ran was handed over to the temple authorities by the respective owners. The area is called Varanattu Madam. During the temple festival the poojas are first performed here. The main Irakki pooja is offered only at the temple and in this place. Nowhere else is this pooja offered. This indicates the concern Lord Mahadeva has for Varanattu Madam.

Soon Akavoor Chathan narrated the incident to the Brahmin. It was indeed Airanikulathappan who had appeared in the form of a stone. And as Lord Mahadeva came from Airanikkulathappan, this temple came to be known as Thiruvairanikkulathappan. Once it was known that both the gods were one and the same, the temple was built and the deity was installed.

The deity installation was done by Punalloor Brahmin. But the two families never used to visit the other family temple. As per this legend, Akavoor Manakkal Brahmin and Akavoor Chathan are considered to be behind the temple formation. When the Brahmin put the umbrella down, Lord Mahadeva who was sitting on the top of it, stepped down and traveled underground to reach first the well and then made for the place where he appeared as Swayambhoo (self born). This is the main reason why we see a relationship between Mahadeva and the well. It is believed that if the holiness of the well is defiled, Mahadeva too is defiled by such an act. To the south of the temple well, one can see a cave that is believed to be the way by which Mahadeva appeared. The Arattu is also done on the shore of the river where Mahadeva stepped down from the umbrella.

Legend associated with Goddess Parvathi's Sreekovil Formerly it was believed that Goddess Parvathi used to prepare food for Lord Mahadeva in the Thidappilli (temple kitchen) when no one was permitted to be in the kitchen. However, once one of the Brahmins belonging to the Uranmakkar (people who have a right on the temple) set out to find out the secret. Seeing the Goddess in her full attire, he shouted out: "Devi Amma, Devi Jagadambika". Goddess Parvathi saw him and grew angry with him. She said, "As you have deviated from your usual ways of carrying out the rituals, I am leaving". The Brahmin could not stand it. He cried out and implored the Goddess for mercy. The Goddess said, "From now on, I will make my presence felt only from the twelve days beginning from the Thiruvathira nakshathram in the month of Dhanu, Lord Mahadeva's birthday. And the devotees who see me one of these days will be blessed". It is on this legendary epistle, that the Sreekovil of Goddess Parvathi remains closed. Unlike in other temples the deity is not given Jalabhishekam (a form of pooja in which water is poured over the Idol). Only turmeric powder is used instead of water.